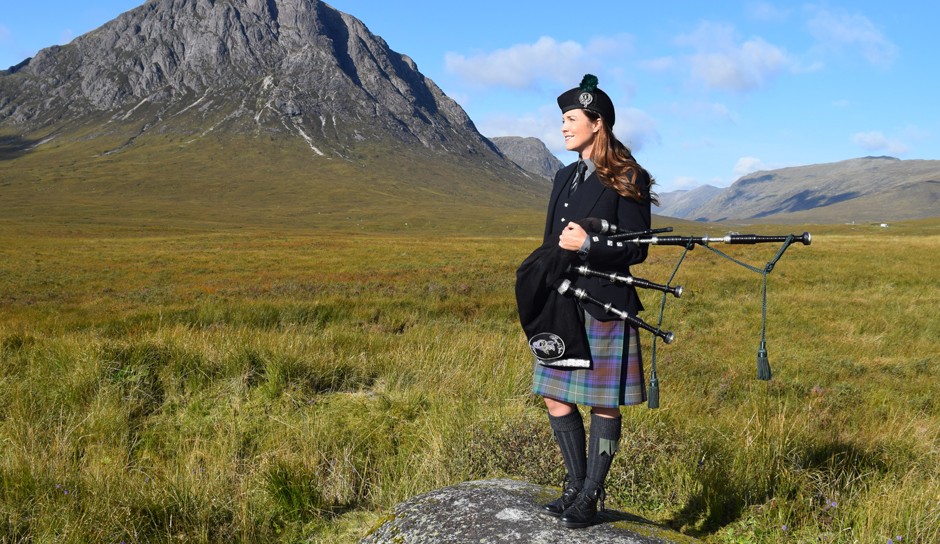 She began developing her skills on the Highland Bagpipes in 2003 and Competed in multiple Highland Games winning first place with the Kevin R. Blandford Memorial Pipe Band.

She has been instructing Pupils of all ages on the Highland Bagpipes since 2007.  She works closely with many Fire Departments in Southern California training the Department Pipes & Drums on Honor Guard Detail. Attending and Participating in large Fire events for CPF  (California Professional Firefighters) and the IAFF ceremonies in Colorado with Rancho Cucamonga Fire Pipes and Drums.

In 2013 Disney Interactive Studios and Rosetta Stone asked her to record for an episode they were producing for a mini-series about Scotland.  This was a short animated series called “It’s A Small World”  This experience had her involved with Disney’s well known Musical genius Richard Sherman.  Together they created a new tune called, “On Our Merry Way”

She has become well known for her role as one of the Lead performing Lady Pipers for STARZ Networks Show, “Outlander”  Appearing on many Red Carpet events in Los Angeles, SanDiego and  New York.

In 2017 she was invited to guest appear on the new Harry Connick Jr. Show in New York City.  Her role was to perform during the show with a live audience and teach Harry how to play the Bagpipes.

INQUIRE ABOUT THIS >>ARTIST